So there's me getting myself ready for winter; I have seductive visions of viscous imperial stouts and single malts that have the bonfire reek my clothes used to pick up from helping my grandad with fires in his back garden when I was little. Then what happens? Well, the small Waitrose in Nottingham starts to stock, and discount, Thornbridge Jaipur and White Swan - the latter being one I don't remember having tried previously. This served as a timely reminder that there are no rules; good beer can be enjoyed at any time of year, and, well, it had to be done really - so here's to the summer? 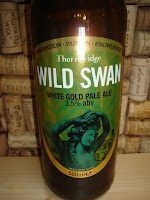 It pours very pale. It's described on the bottle as a 'white-gold pale ale' which I'm not about to argue with. The head was fluffy, light and long-lasting. On the nose it's all grassy hops. There's none of the tropical fruit you get in Jaipur or Punk. Using a wine analogy it's a lot more like a Sancerre to Jaipur's Marlborough Sauvignon Blanc; it has a mineral, flinty edge while retaining the clean citrus fruit from the hops. Once past the initial hop-hit the malt comes through with crystal clarity, it took me right back to getting my nose into a handful at the brewery in the summer.

This was a beer I expected I'd be indifferent about but it really does pack an immense amount of flavour into a low-ish alcohol beer. It's well worth picking up if you want something you can enjoy without getting your head into a fog that's perhaps more appropriate for a weekend!