Well if you're going to enjoy a whisky with a beer, is there an easier way to come up with a combination than picking a brewery and a distillery that are neighbours? 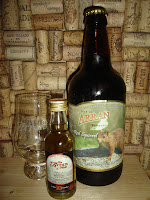 I've done a stand-alone tasting note for the Arran whisky over on my wines and spirits blog. The beer pours a deep mahogany colour but the head disappears really quickly. On the nose it's all about the luxurious malt, with hints of burnt toffee. On the palate it has impressive body for such a low abv (3.9%) which I think is helped by a  backbone of yeasty umami and hazelnut flavours which holds everything together. If there is a shortcoming (and it's entirely a matter of opinion if it is one) in the whisky it's that it's a bit underpowered in the malt delivery, and as part of a combination the beer probably highlighted that, but it's certainly a pleasant enough combination.

It strikes me from the two beers I've tried so far that Arran are a brewery that are stringent in their attention to detail. They may not be producing the sort of beers that are going to cause shock waves on ratings websites but they are really good, solid beers nonetheless.

* The usual disclaimer, I work at the Whisky Shop so I bought this at work.
Posted by Gareth at 09:00

Email ThisBlogThis!Share to TwitterShare to FacebookShare to Pinterest
Labels: Arran, Arran Brewery, Half and Half, Red Ale, Scotland, Whisky