Big breweries are much maligned in beer blogs and the like, but just because a brewery is big doesn't mean it can't make interesting beer, even if far too often they don't. White Shield; 'from the makers of Carling' as the advertising slogan doesn't run,  is perhaps the most extreme example of this, but Fuller's seem to me to be one of the bigger British breweries that offer something special. Having lived most of my life north of Watford Gap it's not a brewery I'm actually that familiar with, but what beers of theirs I have tried have put many operations that espouse the virtues of their small size and flexibility as as asset to shame. 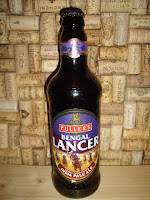 It seems to be a recurring theme of mine that when I try new IPAs I'm actually looking more for how the malt supports the hops flavours and gives the beer structure and backbone. For me far too many beers use hops rather too indiscriminately, almost forgetting that beer is a complex drink, not just a sort of one-dimensional strong hop cordial. There's plenty of leafy hop aroma, all backed up with smoky spices and that all-important biscuity malt spine. If I were to be critical, I found that there was a little too much sweetness, but I realise that's just my taste rather than a fault with the beer, some people will like it more because of that.

Celebrity endorsed, and (rather curiously) made for the Swedish market, but don't let that put you off. 5.3% abv. £1.99 from Ocado.

PS: Apparently it's vegan too, no nasty fish bits required!
Posted by Gareth at 08:00