I got this from the new(ish) Whisky Shop in Nottingham, where I've just started working.* I assumed at the time that the Brewery had a tie-in with the distillery (hence its arrival at a whisky shop) but that doesn't seem to be the case. 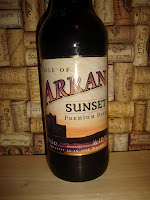 The Sunset pours a light amber colour. It's a little perfumed and soapy on the nose, and generally quite restrained. When you dive in though it's like a comforting malty blanket. It's biscuity, but there is just enough bite from the hops to tease you and keep it interesting. It's one of the smoothest beers I've had in a a long time, impeccably balanced with s lightly spicy finish. Many of the more traditional style lowish alcohol micro-brewed beers I've had recently have been a little rough around the edges, sometimes the malt seems to jar a bit rather than being integrated, but the Sunset has none of these issues. Arran have recently won awards with SIBA, the International Beer Challenge and at the World Beer Awards. On the evidence of this they are well deserved, and I look forward to trying the rest of the range.

Arran look like being a brewery we'll be hearing a lot form in the future, they've got big expansion plans which will be funded off the back of a share offer (see this article from the Scottish Herald in June c/o the SIBA website). It'll be interesting to see how they market that in the light of BrewDog's similar scheme. Here's wishing them luck.

* Hopefully this doesn't make me any less objective about the beer!
Posted by Gareth at 11:08