Sainsbury's Great British Beer Hunt seemed to me to come and go with barely a whimper. I'm not sure if there were simply far too many exciting things happening for it to register, in the form of IndyMan and DeMolen, or whether it was a lack of quality entrants, lack of publicity or maybe I've just been too busy with other things to 'catch the vibe' so to speak.

It's something that I still think is worth supporting but it might not carry on that way. Tucking the new beers in a seasonal aisle along with Halloween hats and Christmas crackers seems crazy to me - OK the beers might not be part of the permanent range but they're neither are they naturally associated with a holiday. The stock also has to be there; there's no point in allowing an entrant if they don't have the beers to go where they're required and you end up with some of last year's beer coming back into the competition. 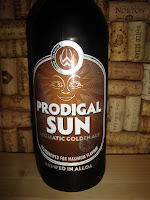 On the positive side, beers like the Prodigal Son from Williams and the Harviestoun Wild Hop Gold are bold, experimental, and really make the competition. Even aside from skunked clear bottles and re-entries, too many were, for me, indicative of a section of the beer market that is content to put 'traditional' on their labels and hope the beer sells, possibly as a 'genuine local' product - lots of soapiness and very little thought. Prodigal Son is nothing like this, it's the best I've had although I've not tried everything I got hold of - I've yet to try the winner so maybe there is time for redemption yet. Prodigal Son is a lovely, juicy, mouth-watering drop, the aroma reminded me of leafy blackcurrant and it's got a herbal, medicinal quality with a lovely ginger spiciness in the finish. There's character right across the nose, palate and finish; always a sign of quality.

Nottingham CAMRA's beer festival is on at Nottingham Castle this weekend. Due to having to commit myself to other things I'm not able to go, which is disappointing because it is a great all-round festival; but with over 1000 different beers there it seems that even for someone with an interest there is a lot of mediocre beer out there to get past before you get to the really stellar performers. My list out of the 500 or so breweries that I was really keen to sample something from only ran to a dozen or so that I'd not tried before. In an ideal world it would be great to try everything once , but with so much choice (and a limited supply of cash and 'constitution') you have to be picky, and not all 'real ales' are are created equal, any more than all beers are.