This wasn't quite the first of the Sainsbury's 2012 Great British Beer Hunt beers that I tried but it was the first one that was both drinkable and not simply one of last year's entries that had been put back in the competition. Normally I wouldn't usually buy beer in clear glass for obvious reasons, but I fell foul of the 3 for £4 deal and the first bottle I had from the collection was light-struck; serves me right really. 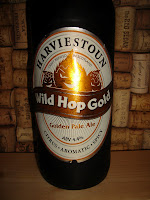 Moving on to more positive things; Harviestoun's Wild Hop IPA was one of the highlights of last year's competition for me, and so I was looking forward to this one. On the nose it's really floral, bursting with elderflower and orange blossom aromas. What it really reminded me of was an Alsace Gewürztraminer; fruity and dry, but with loads of aromatic floral character with pink grapefruit and spices on the palate. I think this is a well-made beer but it's so different I found it a bit overpowering - I really think it would have been much better with food. Having said that this competition should be about trying different things, and just because it's not necessarily to my tastes doesn't mean it's not a good beer. I would definitely encourage people to give it a try, it's that bold in favour that might just be that it's one of those love it/hate it kind of beers.

I was at a wedding over the weekend and I got talking to someone about bold fruit flavours in new world wines popping up in some beers, and making people realise that beer really can be more interesting than just a bland commercial lager. The disappointing thing was I'd had Thai curry for dinner earlier; I should have had it with that, it would have been a brilliant match.