One of the more amusing aspects of working in the drinks industry for so long is the number of stories that you get to hear that have been passed around, often I'm sure while the passers were under the influence. These stories are told, forgotten, exaggerated and manipulated, and sometimes take on a momentum that is way beyond stopping. Drinks themselves are often the victims of all kinds of myths; you name a drink and someone will tell you something 'everyone knows' about it that is generally far more exotic than the truth. 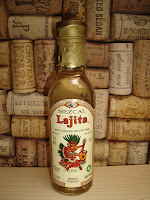 'Have you ever eaten the worm from a bottle of tequila? It's hallucinogenic!' Given that university students are back in university student union bars up and down the country this week, I'm sure this is one that'll get some vociferous airing. Like the best of them, it's not true on more than one account. The worm is actually a moth larva, it doesn't have any hallucinogenic properties, and if you find one in a bottle of tequila then you've been had - it's mezcal - and not even mezcal has to have the larva in there. Tequila is a sort of mezcal that is distilled under much tighter laws governing area of production and agave variety. Only sotol, another form of mezcal, is as tightly controlled in terms of raw ingredients. 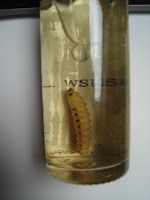 Despite this being a 'reposado' rather than an 'anejo' version of the spirit it has had five years of ageing, a lot more than the rather more delicate Patrón Tequila I reviewed in my last blog entry. I suppose the theory is that the more robust country cousin of tequila can cope with the oak a little better. Let's see.

It's bright, pale gold in colour, with wee floaty bits that I wasn't too keen on getting in my glass - I'm assuming they're bits of moth larva. It's noticeably matured, with loads of barbecue smoke on the nose. There's a little earthiness a and some sweet oak too. On the palate it's dry, with well-integrated alcohol, and the smoke returns with a vengeance, it's a bit like I'd imagine licking a piece of charcoal to be! There's more oak in the form of tobacco and cigar-box flavours, but it's hard to detect any agave character in there. In what is hardly a radical departure, the finish is long and, err, smoky. So therein lies the problem in assessing the quality. They've done a good job in integrating the alcohol and making a smooth spirit but tn the process it's become too one dimensional. Islay whiskies can have as much smoky character, but they always have something to back it up, to counterbalance and add complexity; this unfortunately doesn't. Five years maturation seems too long for this one!