I don't drink, and indeed never really have drunk, blended whiskies. Not really knowing anything at all about whiskies, single malts seemed to me to be a natural starting point; one whisky, from one crop, from one distillery has a certain beautiful simplicity to me. When I worked for Oddbins it was trying different whiskies while trying to learn about the different regions that got me into exploration of the flavours that the distillers could coax from the raw materials. Neither have I tried enough whiskies to feel like I am in danger of running out at any point. I therefore find it intriguing when luminaries such as Jim Murray sing the praises of blends, indeed Ballantine's 17 was his scotch whisky of the year for 2013 in his recently published Whisky Bible. It does make me wonder if I've just missed out a stage in my enjoyment of whisky. After all, even single malts are generally blends of different casks, so blending is all part of the art and creativity of the industry. 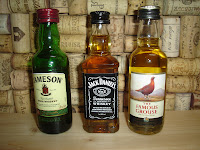 I tasted these three different blended whiskies while practising for my WSET Spirits exam but rather than bore anyone with lengthy tasting notes I thought I'd just go through what I see as the stylistic differences.

The Famous Grouse was first up. I picked it more because of a good write up from Jim Murray that its status as one of the UK's best-selling whiskies; to see if I can pick out the qualities that lead to him giving it some 89 points in the Whisky Bible. I have to admit I struggled. I think I'll have to try it alongside another scotch blend, but there seemed to be very little character. The nose was grainy, with the vanilla oak coming through. On the palate there's some grassy freshness, and I suppose if you were dedicated to whisky to the point where you wanted one as an apéritif, this would be one choice.

The Jameson has more toffee and caramel on the nose, and again on the palate. It comes across as sweeter, but it's equally light in body and character, which complements the grassy, grainy palate. Again this gets a massive 95 points in the Whisky Bible but I was struggling to see why; in fact if anything the finish was worse than the Famous Grouse, the caramel leaving something of an artificial taste in the mouth.

Last up, Jack Daniel's ubiquitous No.7. Saviour of supermarket blends? Well, actually I thought it was better than the other two. The nose had more to it, showing multi-faceted rather than one-dimensional oak character; coconut, and maple, rather than simple vanilla. On the palate there's still some grassiness, this is still light if you're used to single malts, but there's more maple and notes of smoke from the char. The finish has almost gone before it starts. It's rough round the edges but it's hard to argue that there's anything unpleasant going on there. 87 points and, for me, the best of the bunch.

I don't think I'll be changing my whisky drinking habits on the back of this particular tasting, but, as ever, the flavour quest continues, and it was certainly interesting to re-visit and re-assess rather than holding to long-held opinions on these whiskies!
Posted by Gareth at 11:24