A colleague of mine has been writing for a while about whiskies that are, in a way, ubiquitous but forgotten. I won't got into too much detail because you can have a look for yourself over at The W-Club blog, but it's an interesting point and I think it applies across many drinks blogs. The beers, wines, whiskies that originally flicked the switch in your mind when you went from thinking 'this tastes OK, it tastes like beer' (or insert beverage of your choice) to 'Wow! THIS is what it can do, THIS is why people rave about it.' often end up forgotten. I think we're all guilty of it, and while comments such as those made by Jamie Goode are perfectly valid, there are an awful lot of in different products on the market, it's easy to forget that without them many people would never start drinking those drinks we love in the first place. It's also why derogatory comments after articles like this excellent one from Fiona Beckett in last week's Observer, someone who has to write about drinks her readers can get hold of, are so galling. 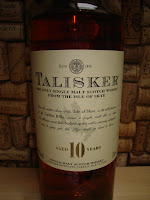 Whiskies like the 'standard bottlings' (hardly a ringing endorsement in itself) from big companies like Glenfiddich and Glenmorangie are met with comments like 'it's OK for a pub malt' and seasoned drinkers forget that it was impeccably made whiskies like these that really switched them onto malts in the first place. For me, Diageo's Talisker was that malt and, credit where credit is due, I have Nick at the Old Worthy brewery up there on Skye for giving me an excuse to re-visit an old friend - I wanted to try it in tandem with their peated Skye beer. It wasn't without trepidation; when people ask me what my favourite whisky is Talisker is up there on the list but in the quest to try something new and interesting I haven't had it in a long time. Would my tastes have changed?

It's clear and bright, amber coloured and the addition of a little water shows some of the oils present in the whisky. On the nose it's clean and pronounced, the malt is noticeable , backed up with smoke, spices and a little toffee. On the palate there is a hefty alcohol kick, but because of the intensity of the flavours and the body the whole package works out well. The phenolic peat comes through a lot more on the palate along with (rather appropriately for today) bonfire smokiness, biscuity malt and some charred oak notes. The finish lingers, a gentle, re-assuring dry-oak caress after the initial power, lulling you into a false sense of security before the next mouthful.

My tastes may have changed, and I'm admittedly on the other side of some magnificent whiskies so I'm less likely to get as blown away as I was years ago, but this is still a magnificent powerful whisky. I love it when peat plays as part of an orchestra of flavours rather than soloing, and this is one of the better examples of it doing this. Hello old friend, glad to have you back.