This was a real treat. I had tried some Japanese whiskies before but it was a few years ago in a bar a friend was running, and I didn't really have a chance to do in-depth tasting notes - although it was nice to get an initial feel for them. My over-riding memory was the light, floral style, which seemed to strike a familiar chord when the first whiskies were poured and Suntory's whisky ideal was described as 'subtle, refined and complex', a mantra returned to throughout the presentation. I'll post a write-up in two parts, first up to talk a little bit about the whiskies' points of difference, and then some tasting notes. 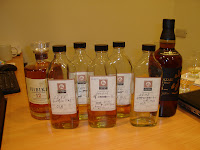 First up was the Yamazaki 12 along with a little history of Suntory, its founder, Torii Shinjiro, and the Longmorn and Hazelburn trained man he recruited to start whisky distillation in Japan; Masataka Taketsuru. On a technical note, the Yamazaki distillery operates two mash tuns (one stainless steel, one wooden), six pairs of differently-shaped stills and uses five different sorts of cask. Multiply all that together and you can end up with sixty different whiskies from the one distillery. If it's complexity you're after, then that is certainly a way to get it.

Next was the Hakushu 12, from Yamazaki's sister distillery, which was at peak production the largest single malt distillery in the world. Unlike at Yamazaki they don't use any Mizunara, or Japanese oak, for maturation of the Hakushu. A few years ago Michael Jackson suggested that Japanese whisky didn't really have its own separate identity as yet,1 but it could be argued that the judicious use of the Mizunara really is starting to separate Japanese whisky from its Scottish roots and traditions. As I understand it it is the addition of a small component aged in casks made from the tight-grained, slow-growing Mizunara that imparts the floral and sandalwood notes to the other whiskies in this tasting.

Next came the Yamazaki 18, a whisky with a rather large reputation! Yamazaki is one of the most decorated distilleries in the world, having won competitions wherever you care to look, and this whisky in particular is a previous winner of many a global spirits competition.

The final pair of whiskies were two Suntory blends, Hibiki 12 and 17. Unlike in Scotland there are no real business relationships between whisky companies in Japan, and so to make a blend, with all the implications of consistency that that implies, is correspondingly more difficult. Unless, of course, you have access to the multitude of whiskies that the blenders at Suntory do for Hibiki - hence why this can be a 100% Suntory blend. The grain component comes from a third Suntory-owned distillery located near to the Yamazaki distillery; Chita.

Lastly, many thanks to Tatsuya Minagawa of Suntory whisky for visiting us in Nottingham and hosting a great evening; fun, flavoursome and informative! I'll post some tasting notes on the whiskies when I get a chance.