The blog is taking a bit of a back seat at the moment. Anyone who has worked in pubs, or retail generally, in the run-up to Christmas, will have a reasonable idea of why. It can be a lot of fun, and this week I've got my fifth extracurricular tasting in less than a month too. It is also most definitely tiring, especially as the 'research'* has continued apace, honing my knowledge so that when I do get to put fingers to keyboard my palate is at match fitness.

Libertine Black IPA is one that's popped up on this blog before; I had it on tap not long after it came out, and was keen to re-visit it in bottle. I'm sure enough has been written about whether Black IPA is a 'legitimate' beer style, so I won't unearth that particular debate, apart from to say that I think most beer drinkers know what they expect from it now it's been part of our vocabulary for a while. 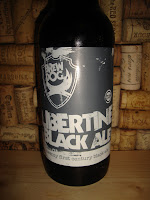 On to the beer. On the nose there's the same dusty rough edge that I associate with Punk and Jaipur, but less of the tropical fruit, it being countered with cocoa and chocolate. There's also lots of black cherry which continues on to the palate. The hops make it really moreish, surprisingly quaffable for something weighing in at 7% - I'm guessing the malt used to turn it from being a regular IPA also take away some of the mouth-puckering bitterness you sometimes find. All the dark fruit is wrapped up in bitter chocolate cake flavours, almost liqueur-chocolate-ish, but without the sweetness. I'm really glad this has become part of BrewDog's core range, I thought it was great!

Tonight, the research continues in the form of a Japanese whisky tasting, courtesy of Suntory, the guys behind this amazing collection as illustrated by Pete over on his blog.

* I'm sure I enjoyed the Black Rocks, but it was my birthday, and while I'm quite proud to say I didn't over-analyse it at the time, that pride is somewhat tempered by the knowledge that I probably couldn't have done even if I wanted to...