Nick at Old Worthy brewery sent me a bottle of this, as he did lots of people who write beer blogs, so there are plenty of excellent reviews out there. I felt like doing something a little different, and so with a nod to Nick's distilling history I thought that combining the new brew with an established local giant might be a bit of fun, if not particularly original (since I did a similar thing the other week, and even if the malt is actually from Jim Beam's Ardmore distillery rather than Talisker). If you're interested in some of my thoughts on Talisker have a look at my other blog; it's an old favourite and even before I'd popped open the Old Worthy I was most grateful that I had come up with an excuse to renew old acquaintances. 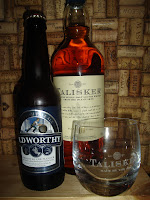 Before I get into the nitty-gritty bit of the tasting note, and at the risk of rushing to a conclusion, a quick heads-up; if you've never tried Old Worthy then you should if you get the chance. It is a beer with a genuine point of difference, the use of peated malt, that goes far beyond employing a marketing department to tell you that that's the case. OK, that's not to say you'll like it but you never know until you try it! I was interested in finding out how the peat worked with the more conventional 'beer' flavours because I tend to find peatier whiskies overpower or clash with many beers when I drink them together. On the nose I didn't pick much of the peat up, but I don't think that's particularly a bad thing, it quickly took away any doubts I had as to whether the beer flavours and aromas could some through rather than it ending up tasting like a watered-down Islay. All of the peat came through on the palate, but without the maritime or iodine notes that you get with some peated malts, which can be off-putting in conjunction with a beer. This meant it contrasted brilliantly with the sweeter malt of the Talisker; the whisky dances with rather than accosts the beer, there are elements they share and things they disagree on, but it's a great partnership. This is a really well thought-out beer, at no point was I thinking 'it's just using peated malt as a novelty' they've made sure, probably through judicious use of honey and wheat, that it retains its balance.

Nick wants this beer to adorn the jerseys of the Scotland rugby team. I'll look forward to seeing it on there, albeit in those brief seconds before those jerseys are engulfed by the red tide at the Millennium. Good luck with the beer and thanks for sending me a sample.

Email ThisBlogThis!Share to TwitterShare to FacebookShare to Pinterest
Labels: Half and Half, Old Worthy, Scotland, Scottish Ale, Skye