Rhum? What's the matter, spell-checker not working? Trying to sound like Stewie from family guy? I'll have some rHum with my cool wHip please. 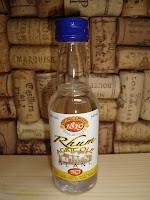 OK, so, lame jokes aside. Rhum Agricole is different to rum in that it is made not from molasses but from sugar cane juice, and generally comes from French-owned islands of Martinique, Guadeloupe, Réunion as well as Mauritius; which is where St. Aubin is from. Distillation seems to owe something to the French influence over the area, in single column stills similar to those in Armagnac. A low-strength distillate suggests there should be a good amount of character left in there after the process, but let's see.

It's clear as you'd expect a light rum to be, and it's only once you get your nose in there that the difference becomes apparent. It's no shrinking violet of a light spirit, no rum that could easily be confused with a vodka. If you were to confuse it with anything it's more like a tequila it's that vegetal. There's some floral notes there and what I can only imagine is the aroma of cane juice. On the palate it's off-dry and there is a spirity burn, with estery banana lurking in the background. It's a rough and ready style of spirit and I ended up putting a little more water in just to break out the flavours a little.

In conclusion I can only suggest it's a pretty good example of its type because it really has that point of difference to conventional molasses based rum. I went back after trying this and tried it alongside a sample of Bacardi and it was near enough impossible to pick up any flavours from the Bacardi, all I got was its sweetness, the rhum is that powerful - if lacking in subtlety. A fully deserved extra letter I suppose!