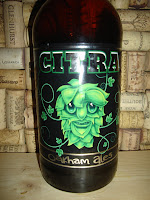 I put this one off for ages, and now I'm struggling to work out quite why, because I'm pretty sure it's something I'd pick up again. I think it was partly because Oakham JHB used to be around a lot in the pubs I frequented (not least because I lived in one) and, while it was brilliant at the time, I became tired of it, even if that was more of a fault of its pale (sorry) imitators than JHB itself.

There's bags of grapefruit-led citrus fruit on the nose, tempered with enough tropical fruit to keep the attacking edge off but not so much as to stop it being refreshing. The palate's all about the juicy fruit from the hops; the grapefruit is back with a touch of soapiness, although far from being so much as to be off-putting, and again there's support from tropical fruit, all without it careering off into over-sweet passion fruit territory. It's all really clean and fresh, no wallowing about in cloying sweetness for this beer, it just merrily leads you into grabbing the next one.