This is the first lot of locally-brewed bottled beers I've picked up since I got down to Pembrokeshire. Preseli are based in Tenby. The Narberth Spar had five of their bottle conditioned range, and I got three (picked pretty much at random) for £6.50 - from £2.49 each. 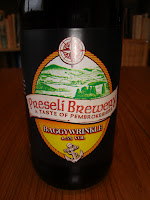 The Baggywrinkle is billed as 'A traditional hoppy bitter' and it pours an orangey-brown colour. It's a decent enough bitter but I'm not sure I'd describe it as particularly hoppy; plenty of ginger-snap biscuits and the odd smoky note. Most of the aromas I got reminded me of a mash tun rather than bags of hops. There's a bit of pithiness on the palate and it's got a really earthy finish. Overall I thought it really could do with more bite. 4.5% abv. 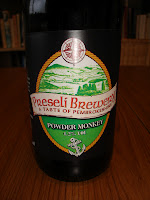 The Powder Monkey is another bitter, but I thought this one had more character; with lighter, citrus fruits in there and the malt integrating a little more into the flavours making an altogether more rounded, balanced beer; although once again I'm not sure I'd describe it as 'full-bodied,' which is how it's described on the label. It seemed something of an exaggeration, although the bit about the crisp finish was far closer to the mark. 4.2% abv. 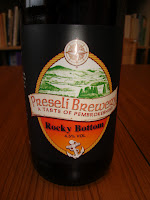 Last up was the 'Rocky Bottom' Golden Ale. I thought this was the best of the three, it had the most character, with some more spices and some of the promised wild berry fruit coming through. It still had that faint earthiness, as if some of the malt hadn't really integrated fully into the beer though. 4.5% abv.

If I were being critical, taking myself away from the holiday if you like, the Preseli beers I tried weren't all that inspiring, but I would try them again (or more of the range) for a few reasons. Firstly because they weren't out and out bad; I don't feel people will drink these beers and think they're being taken for mugs, although at the moment they're probably not offering anything more than the Brains that is ubiquitous in this part of the world - unless you subscribe to the idea that bottle conditioned beer is automatically better. I also think it's good to at least try and support local businesses when you're staying somewhere. Finally I'd give them another try because I think they're a small enough operation to make progress not only realistic, but likely. Yes, they are commercial enough to appear in local supermarkets, putting them right in the firing line, but that doesn't mean that they can't progress. Good luck to them.