Partly due to reading some interesting blogs by the home brewers of Twitter (I'm looking at you David) and partly just due to wanting to understand a bit more about how brewing works, I'm thinking about having a go at brewing some beer at home. 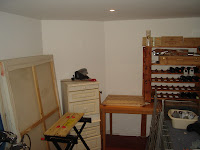 I'd rather not take up space in the house if I can avoid it, and having a baby crawling around the place means it wouldn't be a great idea to give her something else she can get into which she isn't supposed to! I do have a cellar though, and if it's feasible to get a small set-up in there it would be ideal.  I first mentioned it to a few people the other week, and Graeme of Chromosphere blog fame kindly suggested brewing lager would be a better idea because of the cooler temperature. From what I've been told/found out so far a starter kit would probably do the job, but it sounds like I'm going to have to make sure there's a lot of yeast available.

Here's where I am so far: