This was supposed to be my good luck beer for watching Holland play Germany the other night. I've got family over in the  Netherlands and despite being armed with inside information that the Dutch defence might not be up to much (a text from my brother; he was right) I settled down with a fair degree of optimism. 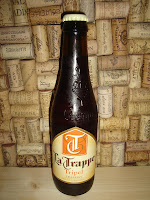 It pours a lovely dutch royal orange colour. Although that may be more bronze if you're not affected by the all-pervading glow that is the current Dutch home kit - which I'm guessing is designed to lessen the carbon footprint of the Netherlands by reducing the need for landing lights at Schiphol. The coriander is noticeable on the nose, and initial flavours are of apple and spice. As it warmed a little (It lasted me until the second half) the sweetness on the mid-palate came through; I got Satsuma and Brazil-nut notes. It's dry and malty with a pithy-orange finish. All rather Christmassy really! I love Trappist beers, it is probably these more than any that got me really exploring the world of beer, taking me away from my comfort zone of British beer when I was working in pubs. While this isn't my favourite, I still enjoyed it and I'm going to make an effort to try the others in the range if I can.

So as a talisman for a Dutch victory it didn't work; the Germans were too good. As a beer for the match? Well, it was orange, and it left something of a bitter taste in the mouth. Which is kind of appropriate I suppose.

Here's to a victory over Portugal on Sunday. Hup Holland!

The De Koningshoeven brewery that brews the 'La Trappe' range is well known as being the only Trappist brewery outside of Belgium; this official status allows them to describe their beer as 'Trappist' on their labels and use International Trappist Association logos - although this has been a point of dispute in the past). However, this may all change with the Stift-Engelszell monastery in Austria now brewing, As far as I understand it they might have to wait a while before being able to take advantage of full Trappist status and it isn't necessarily a given. It seems that the Abbaye du Monts des Cats that brew 'bière trappiste' and are listed on the ITA website under 'Trappist Breweries' will not be granted that full status because of the beer not being brewed within the abbey walls. If you'd like to know more have a look at Chuck Cook's Belgian Beer and Travel Blog. Finally, rumours also abound about the set-up of a Trappist brewery in Massachusetts, although it seems this might well be the world's ninth once things get moving.

I apologise if any of this information is incorrect, it's just what I've been able to see on a brief look around on the web - and I'm sure everyone knows how reliable that can be - any further links/posts/information will be accepted with the grace it is offered.
Posted by Gareth at 07:00