At first glance vodka has something of a paradoxical nature. How can you objectively evaluate, which generally implies looking for character, a spirit which is distilled to a strength that guarantees it will have very little character of whatever it is distilled from?

It is argued that vodka simply doesn't taste of very much, which is why it just gets mixed in with something else to disguise the 'flavour' of the alcohol. Will the years of experience of the Cognac master-distiller who was brought in to distill the latest vodka shine through a couple of hundred millilitres of Irn-Bru and ice? I'd say probably not. It's also easy to be cynical about the rise of 'premium' and 'super-premium' vodkas. I think it would be naive to suggest that some brands are anything more than a constructed product that rely more on advertising and creating the 'next big thing' than actual authenticity. Sidney Frank, the creator of Grey Goose vodka, once famously said that vodka was 'just alcohol and water,' and his entire business idea seemed to be creating a brand that he could sell for 50% more than the market leader at the time which was, and still is, Absolut (owned by Pernod Ricard). Frank's plan clearly worked; Bacardi paid $2 billion for it when they bought the company, still the largest drinks brand acquisition in history. 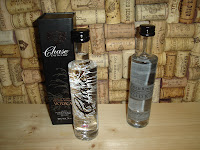 So where does that leave the flavour enthusiast? Should vodka be dismissed out of hand? Well, no, and I think potato vodka provides a good illustration of why. Despite popular preconception, potato vodka is a bit different to the norm. Potatoes are not as efficient a source of fermentable sugars compared to other sources, and as such most vodkas are based on grains; or indeed whatever is to hand where it is made. These base products do have an effect of the eventual quality - the best vodkas are considered to come from wheat, barley, rye and potatoes. In a similar way to the grain character of the Snow Queen vodka I reviewed here, I would expect potato vodkas to have certain characteristics of their own along with the purity you'd expect from a quality vodka. In particular I'd be looking for a rich, creamy texture - like properly done mash, and more body than other vodkas. This character is quite an important distinction. Although the two vodkas I have to sample are from different parts of the world they are first and foremost potato vodkas, it is that that will define their style rather than geographical origin.

The two I've got to taste are the British distilled Chase and Cold River, from the USA. Reviews to follow since I've rambled on a bit here.
Posted by Gareth at 15:42