I raided the cellar for this one since it was our wedding anniversary on Monday. I was a bit late on the celebration but Tuesday's dinner was far more appropriate to celebrate with than Monday's, and what's a day after three years? Appropriately enough this one's actually from the year we got together. 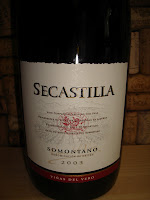 The Secastilla is made by Viñas Del Vero and it's a single-estate Garnacha from Somontano, a DO in Aragón, northern Spain, almost directly to the East of Rioja. This is at the forefront of something of a Grenache turnaround in the region. Whereas before it had faded into use for rosado production Viñas Del Vero resurrected this particular vineyard in order to take advantage of the old Garnacha vines.

As you'd expect at this age the ruby colour's started to fade and there's a definite brick-red colour to the rim. There's still lots of fruit on the nose; plums and cherries, all backed up with vanilla oak.

On the palate again there's still plenty of fruit; more red and autumnal notes. The tannins are a little dry and dusty from the age but I think that's counterbalanced by dark chocolate and olive flavours coming through. There's an almost Australian finish with uplifting eucalyptus and cherry notes. It's very much a wine still in its prime, and its big Mediterranean flavours brilliantly accompanyied the aubergine lasagne with ciabatta, salad and balsamic dressing.

I've no idea where I bought it but I paid £12.99 back at the end of 2005. I might be wrong but this could well have been from the first vintage under this particular label. I can't see any information about earlier wines, and certainly the prices seem to climb in subsequent years. 14% abv.
Posted by Gareth at 07:00