The reason for spirits appearing on this blog is because of an impending exam I've got coming up in November. It is supposed to be just about spirits but since I got given this as a blind tasting I though it might be interesting to review it anyway. From the outset I was struggling; cherry spirit in the form of kirsch is something I'm not really familiar with, and doing an objective review of its sweeter cousin was going to be even more tricky! I've simply not tried enough examples to be able to compare it. However, at the time I tried it completely blind - so I had no idea at all what the liquid was in the glass. These notes are 'in the raw' so to speak (when I thought it was a spirit) and I'll comment a little more below. 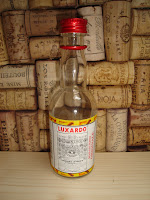 It pours clear and bright, water-white with noticeable legs/viscosity. Oils are obvious on the addition of water but there is no louching. On the nose I thought it was floral, lots of blossom aromas, and quite 'spirity.' On the palate it is medium-sweet and very smooth, with well-integrated alcohol. The main flavour is of candied fruit; glacé cherries and syrup, with hints of marzipan. The finish is short, with the sweetness becoming more dominant. In terms of quality there's no harshness to the spirit, but I'm not sure that it really exhibits a lot of character from the base fruit (for reasons I now realise - see below).

As I mentioned above, this isn't really something I know much about. It was certainly interesting to try, and maybe next time I'll know what I'm looking for! Apparently the marzipan flavour comes from the cherry stones, which are crushed to form the original distillate. Cakes from the cherry pulp (once the juice is removed) are macerated in the original, stone, distillate. This produces the liquid for the second distillation. After ageing in ash sugar syrup is added then allowed to marry (again in ash barrels so no colour comes out) before being bottled.