It was a big week last week. I got a phone call last Monday asking if I could be the new head of Heineken. I said yes, but only on the proviso that I started on Thursday as I was busy Tuesday getting a guarantee of world peace and Wednesday curing all known diseases.

All right, none of this really happened; but just as a bit of fun I wondered what I would do if I could exert some influence over a massive company like Heineken. It's two-fold really. My first question is 'What do big beer companies do for us?' and by us, I mean the tiny minority; the beer geeks. The other question is 'What could they do?' which is potentially a far more interesting one.

Large beer companies come in for some pretty heavy criticism on beer blogs; I'm as guilty of it as anybody and don't really make any apologies for it. However, that's for other posts. Credit where credit is due. It was great to read about Martyn Cornell's brewing trip to Cardiff, not least because of it marking the setting up of a brewery that hopefully will be producing some interesting beers. Recently many bloggers enjoyed the hospitality of some pretty big corporate sponsors at the European Beer Bloggers Conference, and similarly the recently announced British Guild of Beer Writers' annual beer writing competition has picked up sponsorship from similar firms. On a more personal level, Worthington's White Shield provided an ideal accompaniment to England's opening match at Euro 2012 - this I can definitely say is a big brewery doing a good thing.

So I'm sitting in my entirely hypothetical office, wondering what I can do with all this power to improve the beer industry. I've got some ideas which I'll share in a follow-up post, but if anyone fancies coming up with any, than that would be great. It doesn't have to be realistic, I'm sure there are enough marketing types round here to make absolutely anything profitable. Well, almost anything... 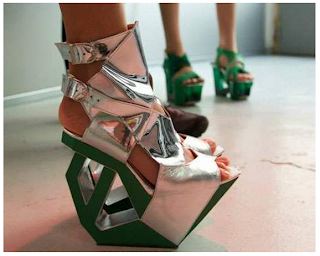 All right, all right. What would you do?
Images are taken from and I'm assuming are therefore the property of Trendhunter. Original 'R2D2' article and other images can be seen here. Original 'Heels' article here.
Posted by Gareth at 13:27