Snow Queen is an organic vodka from Kazakhstan, and if memory serves me correctly it's the first time I've drank anything from Kazakhstan - it's certainly not the first country I think of as being a major drinks exporter to the UK, but of course that's not to say that they don't know how to make vodka. 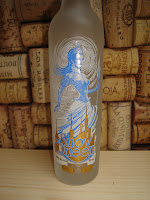 It's an unflavoured vodka, and I tried it blind, so I had no idea what it was when I started. Thus in my notes I put that it's a water-white liquid which shows no louching on the addition of water. I got fresh citrus and a slight earthiness on the nose. It's dry, with well-integrated alcohol; light-bodied with no harshness. Although it was, as you'd expect, a neutral spirit I did pick up citrus and brioche flavours and a grainy quality; it's noticeably a wheat vodka. I thought it was good quality, there's certainly nothing to detract from the purity of the spirit - I'd compare it more to Scandinavian/Northern European styles than Polish vodkas.