A gap in the terrible weather today and a great time was had by the family down in Saundersfoot. As a bonus we swung by 'The Quay' for a half of 'Firewater' which, from what I can work out, is just cask Worthington's which has retained an old nickname back from when Firewater was actually one of the beers served at the pub. Since it's served via a jug from firkins tucked away behind the bar you're hardly besieged by branding telling you exactly what it is you're drinking, so I guess it's pretty easy for an old name to stick. 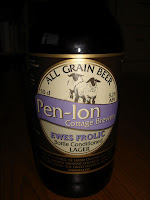 The 'Ewes Frolic'  and 'Tipsy Tup' are two from a selection of Penlon beers I picked up from Ultracomida; a coffee-shop/wine-shop/deli in Narberth. It's not quite as local as the Preseli beers I tried the other night, but they're brewed not too far north of here in Ceredigion. The 'Ewes Frolic' is a bottle-conditioned lager which pours clear up to a point (I shared it, my wife got the clear half). There's enough citrus hop character in there to get your mouth watering and it keeps its lager credentials with its light body and good, clean, smooth finish. It wears its 5.2% abv well. Although I was a little suspicious of the addition of 'a teaspoon of corn syrup' to get the bottle maturation going I enjoyed this one - it certainly didn't end up with the sweet corn taste you can sometimes get in an American adjunct lager. 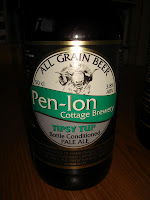 The 'Tipsy Tup' is a pale ale, and again it's bottle conditioned. It pours a not dissimilar colour to the lager, with a good thick head to it. It has a touch of soapiness on the nose, but not enough to make it unpleasant, in fact it provides a good counterpoint to the gentle pithy bite of the hops. I thought this was at least as good as the lager, it would make a really good session beer - in fact it'd be great if the Cresselly Arms would get this in cask as the new Firewater! 3.8% abv.

Just as an aside if you do have these beers in bottle they do have quite a heavy sediment, if you don't like yeast in your glass let it settle for a good while and pour very carefully. They do actually recommend decanting into a jug then into your glass, presumably so you can see the sediment better while you pour as well as get a good head on your beer.

I'm not sure on the individual prices since the receipt isn't entirely clear but I got a selection of four Penlon beers for £10 from Ultracomida.

All of the Penlon beers I got are vegan friendly.