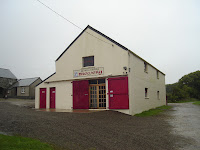 It was our last day in Pembrokeshire and we braved the weather in the Preseli Hills and made the half-hour trip from Narberth to the Gwaun Valley Brewery. 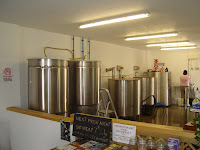 Sometimes you find out about things in the strangest places. I noticed some cider, and a price list, in the window of a camera and sports optical shop in Narberth - an unusual combination if I ever saw one. I popped in to see if they had any beers and ended up with a couple from Gwaun Valley, which led me to have a look where they were - hence the trip across the Preselis. I jokingly asked the guy in Celtic Vision if he had any trouble getting an off-licence for a camera shop. 'Oh, it was far weirder than that, we own the ice cream shop next door and we had to get the licence to sell our home-made alcoholic ice-cream.' Now that is proper entrepreneurial thinking, Richard Branson's got nothing on these people! 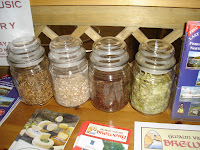 We had a couple of samples off hand-pull at the brewery along with a nose of some different malts and some hops. It's only a small operation based in an old granary. It stemmed, like many microbreweries I suppose, from a home brew project, and they brew six hundred litres or so of beer a couple of times a week. We made off with a couple more bottles ( I was driving), one of which went down a treat with the home-made ciabatta bread pizza we had for tea. I'll do some reviews as I crack open the bottles. If you do ever find yourself in Pembrokeshire I recommend paying the brewsters at Gwaun Valley a visit, if nothing else they have a very good roof. 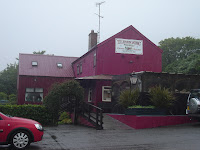 On the way back we had something to eat and a cheeky half of 'Cwrw Tafarn Zinc' which is apparently brewed especially for the Tafarn Zinc - it's the pub you can probably just make out for the glare of the sun in the photo. I've no idea who it's brewed by but I figured it was a little more authentically Pembrokeshire than St Austell Tribute and Worthington's. Also in Rosebush, just round the corner from the pub, is the amazing Pant Mawr Farmhouse Cheese shop, where me, my wife and our daughter munched our way through a selection of six of their cheeses - all of which are veggie friendly. Best of the bunch, or at least the ones we decided to smuggle back over the border, were the 'Caws Preseli' and the 'Mature Cerwyn' although it was a close run thing for me with the two smoked cheeses. If I have a particular moment of inspiration I'll see how they match them up with some of the beers.

So that's Pembrokeshire done for another year, and as a bonus I've got a haul of beers to enjoy and  review. The weather was as bad as I ever remember it being, as I may have mentioned once or twice, and I have been going there on holiday almost my whole life, but I know I'll be back. It's a beautiful part of the world, and it seems that the explosion in breweries is reaching to the far west, I hope it continues!