Cwrw Hâf from the Tomos Watkin brewery over in Swansea is apparently 'A Taste of Welsh Summer.' Well indeed. In the six days we had in Wales we had six days of what I heard a local describe as 'Pembrokeshire sunshine.' Maybe the taste of summer reference is a nod towards the percentage of water in beer? 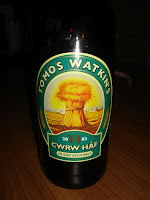 Anyway, the constant deluge of rain didn't stop me sniffing out some Welsh beer, although I didn't get to as many pubs as I might have liked - although that was mainly because of having to drive. I got these two from the Spar in Narberth. The Cwrw Hâf is perhaps a little more of a commercial style than the more locally brewed beers I tried, it's not bottle conditioned and it's simple, but tasty. Initial aromas are of citrus, particularly lemon, and there's a good refreshing bite and a sweetish, clean finish. It's not a particularly complex beer, and I think that means it wouldn't really benefit from being bottle conditioned, sometimes it's fine to keep things simple! 4.2%. 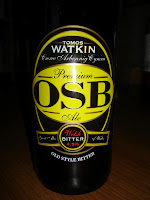 'OSB' or 'Old Style Bitter' is a bit more full-bodied; it's a copper coloured bitter with a spiciness and a bit more pithyness/orange peel flavour to it, along with more expressive biscuity malt. Good head retention. Again it's not going to register as one of the world's most complex beers, but I enjoyed it nevertheless. A drinker not a thinker? 4.5%.

Not entirely sure how much I got these for, I think it was about £3.60 for the pair. Well worth it if you want something tasty for sheltering from the south-west Wales rain!