This month's beer blogging session is hosted by Brewpublic and the question being asked is 'What drives beer bloggers?' 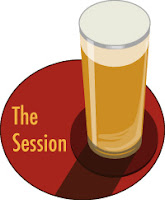 I've been meaning to do a bit of a review of my first few months of beer blogging, and so this seems like a bit of an opportunity. It's probably entirely self-indulgent so you might want to stop reading now.

I was chatting on Twitter to a fellow blogger the other day and he was thinking about packing the writing in.* His suggestion was that the world doesn't need another rubbish blogger. I've read similar sentiments from others while not referring to themselves - there's some pretty negative stuff in some beer publications that seem to delight in denigrating new bloggers in particular. Amidst all the talk about beer snobbery that goes on, this is the sort that for me is the really damaging kind, knocking people for daring to be enthusiastic rather than keeping silent. On the other hand getting into beer blogging has also lead me to chat to some really interesting people - I've learned a lot from others and their many different styles of writing - and I'm ever grateful for the support I get from many of those that make up a great on-line community. Were it not for them I may well have given up already so they're definitely a driving factor!

I'm under no illusions about how good a writer I am, or how many people read what I write anyway, but, as I suggested before in reference to writing about wine, I'm not going to get any better at writing by not doing it.

What motivates me isn't the numbers, it's the beer and the infectious excitement surrounding it. You only need to read up on things like last week's #impoff event to get the idea. I enjoy beer, and at the moment I am enjoying writing. Simple I suppose. As to the future? Well Sturgeon's Law already suggests I'm probably in a large majority with the rest of the other rubbish, and I don't need established authors telling me that I should stop because they've been 'writing for longer than I've been alive' - and so some sites I've just learned to avoid. Maybe there is another law that suggests I'll give up - but I won't just yet.

Edit: If you haven't read Andy's superb analysis of the #impoff evening, you should. Also a slightly 'different' account of the evening from Phil.
Posted by Gareth at 08:44

Email ThisBlogThis!Share to TwitterShare to FacebookShare to Pinterest
Labels: #62, The Session