The British Beer & Pub Association’s Statistical Handbook 2011 has suggested that drinking in the UK has been falling since 2004, according to an article on the Drinks Business website.

Leaving aside my suspicions of such statistics and their interpretation, there is one assumption that I would be perfectly prepared to make with respect to this survey: It won't get any press coverage.

This is a shame - it would be good to see this picked up and analysed - but if it turned out to be accurate and without bias, then it would hardly fit in with scare stories about 'Binge Britain,' accompanied by the usual photos of drunk women in short skirts sitting on a pavement/drunk men bleeding on a pavement that keep us informed (providing we read the Daily Hate) about how broken Britain is. Thus, it becomes a non-story before it even gets started, and consequently the debate never happens... Back to the scaremongering. Now, where did I leave my blue WKD?

I had the chance to have a look round the new Black Iris brewery in Derby last night. It is at the back of the Flower Pot pub, a proper, independent (the owner has two pubs) boozer/live music venue not far from the city centre.

Black Iris' beer is a work in progress project, but they have released three - a pale ale, a bitter and a stout. Bearing in mind these are the first releases from guys who are learning on the job they have done really well - I'm glad to see that they intend to learn the basics, ie. get these styles of beer right, before leaping into more experimental projects. Each of the beer recipes only uses a couple of different hop varieties - again so that they can get an idea of how the hops effect the end product.

Here's the artwork for the first run of beers as designed by a local tattoo artist. 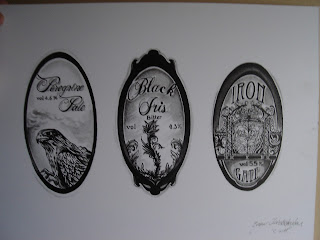 Nick, a proud Dad, and a small but perfectly formed brewery:

Note: This is actually a post from my old blog which kept going wrong, but I thought I'd add a bit and move it over (19/11) as it's something that not many people would have seen.
More backstory from This is Derbyshire here. You can also get more news from Black Iris on Facebook. Their Intergalactic IPA was a highlight of Nottingham Beer Festival for me.﻿
Posted by Gareth at 08:30 No comments: