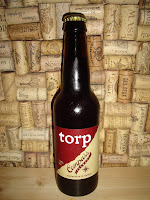 I had a brief discussion on Untappd about this one from Compass. It went along the lines of 'I didn't like it' and me saying that I did. I can see why it might divide opinion. I was persuaded to buy the last two in the shop since it wouldn't be replaced.

In fact I think it even divided my own opinion, if that's at all possible. When I first started it I definitely wasn't sure, the sour 'off' notes were almost too much, but when they dissipated into a pleasantly moreish, sherberty finish I was convinced. There's a herbal, metallic edge to it, and I picked up coffee in amongst the sour, pithy orange. All in all it's quite a flavour clash, and even looking back at my notes I'm not sure how it works, but for me, it did - which is why I ended up with the last two.

My latest half-and-half expedition featured Adnams Broadside and 'Spirit of Broadside', which  is a beer eau-de-vie rather than a whisky. 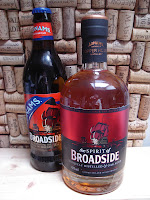 Just to explain the technicality a little. This isn't just a whisky that is at a very young stage, although at one year old it hasn't aged as long as a new make spirit would have to be in order to be legally classified as whisky. In addition it is made from distilled beer rather than distilled ale. A key word here is ale, which is technically not flavoured with hops (ale flavoured with hops is beer) and although nobody would claim that Broadside is the hoppiest of beers on the market it is very much a beer,* and hops being an ingredient means that even at an older age it still won't become whisky.

So what we've got here is a bit of a different animal, it's not whisky for the reasons I've outlined above, but if you're going to put it into a broader spirit church then it's got to be whisky's cousin rather than gin, vodka or rum for example. In terms of assessing the quality (as opposed to saying whether I enjoy it) I think it's fair to look for similar quality indicators as you'd look for in a whisky - complexity and a smooth texture which continues on to a finish. At such a young age that might be unfair but you would expect smoothness and a pleasant finish from any quality spirit, and at the price it's got to be thought of as being in that bracket.

As for the original beer? I think it's fair to say that 'English Strong Ale' is a style that I don't generally go for, I often find the sweet malt a bit too much and prefer something with more of a hoppy bite. That said, Broadside is one that I do enjoy, a ready alternative to a big stout as a winter (or, as seems to be the case, late spring) warmer. It's a comforting beer, dense, ruby coloured and brooding. There's lots of rich fruit cake in there; it's a brandy-soaked Christmas pudding of a beer. Its sweetness means it's one to linger over rather than quaff, which is probably a good thing since it weighs in at 6.3% abv. Its distilled brother is a beautiful burnished copper colour, perhaps reflecting the stills it was created in. It genuinely reflects the flavours of the beer, but with a real lightness that makes it really fresh. Its relative youth works in its favour - it's no big, menacing sherry-monster. There's a sharpness on the nose, fresh green apple and some stewed pear. Unsurprisingly on the palate there's a lot of sweet malt, and Bourbon-like vanilla, but it's generous and smooth without that feeling of it needing a few more years in cask that I've had with some new release/young whiskies. I'm not going to claim that it has the long finish that you pay good money for with a decent malt, but it is genuinely different and it's perhaps not even fair to mention that since it stands up as a spirit on its own - or in this case to accompany its namesake.

Given earlier that evening, after being lulled into thinking warmer weather was finally upon us, I'd got caught in a hailstorm and soaked to the skin, this was a great warming combination.

Broadside and Spirit of Broadside are both available from the Adnams website for £19.99 (for 12) and £32.99 (70cl) respectively, although I picked up a couple of Broadsides for £3 on a Waitrose deal.

* Unless it's served on hand-pull, then it's a 'Real Ale' but I'm not even touching that debate with a very very long barge pole.
Posted by Gareth at 09:05 No comments:

Email ThisBlogThis!Share to TwitterShare to FacebookShare to Pinterest
Labels: Adnams, England, Half and Half, Strong Ale, Suffolk 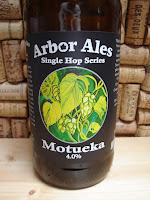 I saw this one on Beer Ritz's list last time I did an order and had to go for it. Despite the only other beer I'd had from Arbor to date not being that successful I had heard great things about them and thought they warranted a second chance at least. The other reason was that Motueka (near Nelson on the south island of New Zealand) is a place with good memories for me; it's where I filled an ambition of mine to learn to skydive. I wasn't very good at it (although, clearly, not fatally bad) and skydiving is something I'm sure my wife is pretty glad I got out of my system. Along with the whole 'overdid watching Point Break as a kid' thing the holiday in New Zealand revolved a fair bit around wine and wineries. I'd not long started work at Oddbins and the bright, gooseberry fruit of NZ Sauvignon had grabbed me (and in my wine classes many novices since) and got me realising that there is no mysticism to describing flavours in wine (or beer or anything else) it's far more about practise, and enjoying the process. I started to learn the different flavours that come even within one grape variety, and learned that all NZ Sauvignon Blanc isn't just about super-ripeness and tropical fruit, indeed I preferred some with more restraint, with a citrus tang. So, Motueka the hop. Biased? Most probably, but there's nothing wrong with going into something hopeful of a good experience.

It's light, with an elderflower note on the nose. On the palate I got a touch of flour but lots of grapefruit and lime with a grassy finish. All in all a great quencher, and great to get all those lovely fresh hop flavours out of a beer at properly sessionable strength. Much as I love those moreish American style IPAs at 6%+ I think I could drink more of this without it hating me! It's got that old 'sunshine in a glass' thing that New World wines are so good at (even if in part they are trying to shake it off as an image). More citrussy than tropical; just as I like 'em.