Having finally banished the cold I had I thought I'd throw myself back into my oak-aged beers. 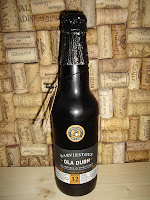 This one's from Harviestoun, a brewer I first came across when we had their Schiehallion lager on hand pull in the pub I was working in, many years ago. I have to admit to certain preconceptions, Highland Park being a whisky I'm a fan of. I was certainly interested in seeing if any of the heathery characteristics I associate with the whisky would be transferred to the beer.

From the opening of the bottle there's a blast of Pedro Ximénez sherry and demerara rum aromas. It pours black with a tight tan-coloured head. The aromas on actually smelling it are like an Irish coffee, all cream and whisky. The initial sweet sherry aromas don't come through on the first sip, the beer (somewhat mercifully) taking over. There's lots of coffee, walnut, burnt malt, smoke, tobacco and cinnamon on the palate. Compared to something like BrewDog's Paradox Jura it retains its 'beery' character well, rather than becoming a completely different animal. It's heady without burn, but it's in the finish that the whisky really shines through, and it's there you can detect the heather of the Highland Park.

On the oak exploration front, does it need it? Possibly not, although I've not tried the Old Engine Oil porter that inspired this beer, I certainly will if I get a chance - if it's half as good as this it'll be a great beer. Does the barrel ageing help? Most definitely, it's all about the whisky rather than the oak, but I can't see how you'd get this depth of character and flavour without it. Great whisky's finish goes on for days in the depths of your mind, and this is a beer that comes close to recreating that.

This one's called... Dubh. Deep, dark, dirty and not to everyone's taste.