Not so long ago I'd have come out of a shop like the Whisky Shop in York an awful lot poorer than I went in. This is of course assuming I'd go in, rather than walking past thinking it was an Orange shop - as opposed to just an orange shop (lucky my missus was there really). So when I did go in it was with a certain amount of fear for the future of my bank balance (I'm a big whisky fan, as I'm sure some of you know). However, since I was pretty poor walking in, their selection of whisky related beers probably saved me from becoming completely destitute. 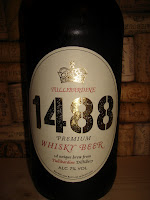 Unlike the Ola Dubh Highland Park, Tullibardine is a whisky I'm not familiar with so hopefully this is as objective an account as I can give. It pours amber-gold, with a tight head that collapses quite quickly. The nose is ester-dominated, with banana continuing onto the palate. It's nutty, with a caramel, ginger and a little too much carbonation. There is a warming finish which you could easily attribute to the whisky, but at 7% abv it's difficult to tell, although the drying effect does seem to be more about American oak than alcohol - it was certainly not the sherried sweetness I've had from other whisky cask matured ales.

I wouldn't normally blog about beers I'm not impressed by, but since this is part of a series rather than a one-off I thought I'd comment. The problem is that there just isn't that much character to the beer, and if the barrel ageing has imparted something extra then that suggests the original beer isn't that great. Tullbardine isn't a particularly old distillery and maybe it's the case that the beer didn't have a strong enough character to put up with what might have been relatively new oak.

On a more positive note, Tullibardine do a Banyuls finished whisky. Banyuls is a Southern-French red dessert wine which has proved a favourite when I've hosted food matching evenings, it's always gone down brilliantly with chocolate cake (there's a great one available from Weavers). I'd love to try this whisky and I'd suggest these would be excellent casks to use for maturing an Imperial or chocolate stout.


Edit: In case you haven't been and my Orange Shop comment completely confused you: The Whisky Shop...

...once you get inside though it's less ambiguous!