Having cracked open an old favourite bottle of wine last week it was good to see Adnams stock its more up-to-date vintage. At the other end of the 'favourite activities' scale I found myself in Sainsbury's the other day, and sought succour in the beer aisle - or, as it turned out, the 'ale' section which was lurking in the wine aisle. It was an Adnams beer that caught my eye. It's a brewery I'm not that familiar with - one of the sister pubs to the one I used to manage used to have Broadside on hand-pull but it's not something I particularly remember having seen a lot of in Nottingham. 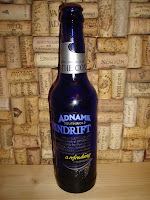 I was musing recently that some beers don't seem to make the transition to bottle that well, but if this is one that was originally brewed with cask in mind then, for me, it translates very well. On opening the grassy and lemony-hop aromas leap up at you, although they're a little more restrained on pouring, when the malt comes through a little more. On the palate it's impeccably balanced between the malt and the hop flavour, the caramel and biscuity malt providing backbone to the light body and the hay and citrus hop flavours. All in all a most enjoyable summer beer.

I feel I have to mention the blue bottle. I thought it was pretty cool, my wife thought it made it look like an alcopop; although she really liked the beer. On the other hand, crisp and refreshing are not flavour descriptors - as marketing terms they're best left firmly in the court of those who make drinks that don't taste of much and need chilling down so far as to make sure you can't taste anything. Adnams perhaps need to have a little more confidence in how good their beer is? It's never easy is it?