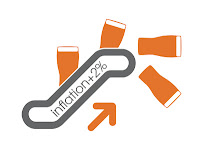 When the beer duty escalator petition hit the one hundred thousand mark the other day, some people were justifiably happy about it. Others were a little more cautious. I feel that it is now that the campaign ought to be stepped up. If you agree then it's probably a good idea to see if you can encourage your MP to get on board, in the hope that if the debate happens it will be worthy of the term and not something that is read to an empty House. It's a bit ambitious to suggest it will turn into a three line whip issue, but hopefully if enough noise is made some people might pay attention.

When I wrote to my MP (via email) I quoted from his April newsletter, something I blogged about not long after.

We need to keep an eye on how the beer duty system is structured, so that it does not advantage the mass production end over the bespoke and higher quality smaller brewers who we need to support as much as possible.

By way of a follow-up, I'll quote from the letter he sent me that I received today:

I certainly think we need to keep an eye on how the beer duty system is structured, so that it does not advantage mass production and supermarket-loss leading over bespoke and higher quality smaller brewers who we need to support as much as possible.

Rather more encouraging was:

I'll continue to press the Government to look at ways of supporting the brewing industry and community pubs, including addressing the Beer Duty Escalator.

Make of that what you will. I'd be interested to hear what other MPs have to say on the issue if anyone else has been in touch.


PS: The escalator image came from the Summer Wine Brewery's Blog (well, originally somewhere else but the link on that post isn't working) who had a bit of bad news this morning in the form of someone breaking into and trashing the brewery. If you get a chance, have one of their beers this week. It's bad enough the government making things difficult without things like that happening. I wish them all the best with getting things sorted!