Last time I sat my WSET spirits exam I got this one thrown at me. Painful as it is to admit, I had had it before, although not so much as part of a tasting session as an end of night chaser in the pub I used to run. I didn't recognise it and the crazy aromas and flavours completely threw me off track - hence my 'revenge tasting'! 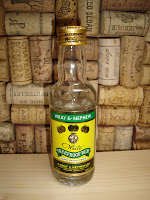 It pours clear and bright, as you'd expect from a white rum. There's no louching but there is a noticeable oiliness on addition of water, and there are strong legs for a white spirit. On the nose it's clean, without anything noticeably picked up from any ageing. The aromas are of dried banana and candle-wax tempered with a touch of lime. It's not as sweet as you might expect a rum to be, the alcohol is quite well integrated for such a strong (63%) spirit, although I did only taste it with water. The flavours are unsurprisingly intense, there's a load of molasses, with lime, cashew and more a banana. Perhaps a little too much of the waxiness and solvent-like paint flavours for me though.

Overall it's a decent quality rum, although I wonder if going for the extra alcohol as left it tasting a bit feinty to put it into the realms of real quality.