It was interesting to read today that the number of breweries in the UK has hit the one thousand mark. Is this number sustainable? My initial feeling is that one brewery per fifty pubs doesn't sound that sustainable, but maybe we could end up in a situation where almost every brewery supplies a network of a few pubs in their area, producing just enough to supply them, and keeping everything local. Or, perhaps even more attractive as a drinker, every pub effectively brewing its own beer? Of course the increase in brewery numbers might be sustainable regardless of pub numbers if the overall market trend towards drinking at home continues. Minimum pricing, 'beer tourism' and ease of access to export markets might also help small breweries compete with volume brands and further strengthen their position. 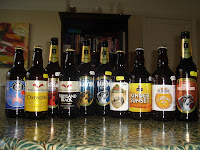 The biggest single factor behind the expansion is the Progressive Beer Duty (PBD) introduced in 2002. Since its introduction the number of breweries has more than doubled. Maybe PBD needs to be looked at before it's revoked entirely? I'd suggest some sort of voluntary change, a recommendation from the industry, might be better than hoping nobody in a think-tank somewhere decides that without PBD the government could recoup a lot of money that would be "Better off in the taxpayers' pockets rather than brewers'."
One of the reasons behind PBD is the promotion of diversity, but are we really seeing that diverse a beer scene? As Ed points out here on his blog, there are certain breweries that come up time and time again when people who are interested in these things are asked what their favourites are. It could be because of blogger insularity, but it could also be argued that there are actually rather few breweries that are doing something genuinely different, producing more than just a few core lines that are, fundamentally, rather similar to so many other breweries. After all, most beer isn't really a local product as such. Yes, it might be produced locally, but it's unlikely that all the raw materials are locally sourced. It's a simplification of course, but there's more to beer being different than a variation in label design.
I'm not writing as a brewer, or any kind of industry insider, and I'm far from the first person to ask them, but I think there are some questions that are worth asking. I'd say thinking about the implications of having so many breweries is something that ought to be done now rather than in the future. I'd hate to think that years from now we might draw a parallel with wine, where EU money ended up being funnelled into vine-pulling schemes and supply and demand were so out of kilter that wine ended up being turned into industrial alcohol. If the UK's brewing industry is, as some suggest, the envy of the world, then maybe exports are the way to sustain what people have worked so hard to put together?
Obviously the question of whether the 1000 figure (or more) is sustainable is a moot one, but without a direction for the industry to move in, a model for the future, I'd suggest things could go rather wrong. It wouldn't be the first time it has, hence why there is a Campaign for Real Ale. At the moment things look rather healthy for the brewing industry in this country, but I would hate to see complacency set in. In the mean time, here's to enjoying what we have!
Cheers.
Note: One piece that's worth reading on the subject is on the Adnams site here. If anyone has any more that aren't behind pay-walls then let me know in the comments. It's not something I'm claiming to know a lot about, and it's also a very broad issue, but I think this milestone raises some interesting questions. Comments are, as always, welcome.
Posted by Gareth at 12:13