Melissa Cole was on fine form yesterday, launching herself at the sexism of certain breweries' marketing techniques over on her blog. It was great to see lots of support in the form of comments and re-tweets from people I talk to in the beeriverse on Twitter. I've mentioned it before but I think it's something that is worth re-iterating. In order to convince a new generation of drinkers (of both sexes) to drink beer, the sexism and schoolboy humour really ought to stop. I'm not talking about censorship or some sort of ban, I just think that good beer should be treated with some respect; it deserves better.

That's not to say that everything has so be constantly and slickly managed by an expensive PR company, but breweries should have, and be seen to have, some pride in their product. The fact is that bottle labels and pump clips are often the first thing a prospective customer encounters, and if they look shabby and out-dated then it will discourage a generation of extremely brand-conscious drinkers for whom sophisticated drinks advertising campaigns are completely normal fare.

If you think it's harmless, and that the casual sexism and cartoon images contained on many labels and pump-clips are just a joke, then fine; but when the 'real ale' selection in your pub is reduced, and a new bar fridge is put in chock-full of Smirnoff Ice, then you had it coming.

Breweries; leave the alienation of women to the big brands like Foster's and Carling - please let them go under rather than something that's worth being proud of. Of course, if you're not really proud of your beer, then feel free to put a large picture of a dog-turd on the label. I suppose at least it's not sexist. 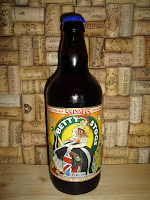 And so to beer, and why that rant is somewhat relevant. My other half was in the supermarket the other week and gave me a bell to say 'Have you tried...' I said I hadn't, and so she bought it. I would have stopped her if I'd have thought a bit more. Skinner's are responsible for, amongst others, the travesty that is 'Cornish Knocker' and, as I think I probably illustrated above, I would avoid of their beers because I think if they're prepared to associate themselves with that sort of branding then I don't think they'd particularly care about their beer.* I'm not saying that's how it is, but that label is the only impression of them that I have and therefore, before drinking their beer, have nothing else to judge them on.

The 'Betty Stogs' pours a pleasant reddish-amber colour and the head didn't hang around very long. On the nose there's a touch of lemon but mainly I got caramel biscuit aromas - kind of like Jacob's Trio if anyone remembers them! On the palate there's an initial light fruitiness; citrus in particular and there's not much to the finish. I think this is just a beer that doesn't translate that well to a bottle. I'm sure it would be a perfectly enjoyable session beer on hand-pull, but like many similar beers it doesn't work so well in a different format. That's not necessarily a bad thing - it keep pubs open after all.

Edit: Stephen Beaumont has weighed in on the issue too. It's not just the 'real-ale' stereotype, it happens everywhere, as you can see from this Session #66 post from The Pour Curator (aka Greg).

* Since I've not tried it then I won't pass judgement on Cornish Knocker as a beer. Simon over at CAMRGB did here though.
Posted by Gareth at 10:48