Whilst up in Yorkshire for most of the last couple of weeks I picked up a couple of Brooklyn beers from Roberts and Speight in Beverley. I originally bought the EIPA for my brother to take back to Holland with him but he forgot it, and because the best before date was next month I did the decent thing and drank it for him. The other was a chocolate stout; since my other half seems to be developing a taste for them, she wanted to give this one a try. More self-sacrifice was required; I had to help since she felt she couldn't finish a whole bottle of 10% beer on her own. 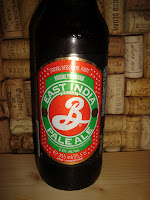 Brooklyn Brewery East India Pale Ale is fairly restrained on the nose, with caramel and maybe a little stone-fruit. The hops are more noticeable once you get to the palate. There you get more of the dankness which I generally associate with the more hop-heavy American offerings - and their British cousins.* A faint wood-smoke and pine bitter finish rounds it all off rather nicely.

As a side note, I'm not sure I'd classify it as an 'English' IPA (apart from for the obvious reason, maybe a New England IPA?) but it's certainly different to the lighter-bodied, tropical/citrus fruit offerings that you get from most American craft brewers, and so I suppose the classification serves a purpose. Having said that it strikes me that IPA is such an abused and misused term that it is in danger of becoming almost meaningless it's so broad. None of this detracts from this as a beer though, I thought it was excellent. Although it owes most of its flavour to the hops the malt is not ignored, and I think this gives it a complexity that often gets overlooked in modern IPA. 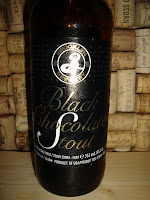 Brooklyn Brewery Chocolate Stout is a different beast altogether. I'm not sure that full-bodied even begins to describe this one. It's almost chewy! I actually found myself swirling it round my snifter glass to see if it had the viscosity of a Pedro Ximénez sherry - it's not quite that thick but you get the idea. It's sweet, stopping just short of being cloying, which is helped by a bitter finish. As well as the rich chocolate flavours I got a touch of liquorice too.

* Many thanks to David (see the link) for giving me a word I can use to describe something that reminds me of weed!