Do some beer styles just not 'translate' that well from draught to bottle? Whenever I'm in the pub I almost always have one of the beers that are on tap. Exceptions would be rare, usually imported beers that I know wouldn't be available on draught or from the usual places online where I buy beers to drink at home.
I don't think it's the same thing as I come across in wine classes. Some wines don't show themselves too well in a rather sterile, 'classroom' environment; most quality wines are made to go with food, and actually don't come across that well compared to a modern fruit-driven, 'TV wine' when they're sampled on their own. I might be wrong but, while there are many great food matches for beers, there are fewer of them that are made specifically to go with foods. I think it's maybe a bit more like 'dance' music that might be great in a club when played through a large PA, but somehow falls a bit flat when it's on your home stereo. Or maybe it's like a recording of a gig you really enjoyed when you were there but, when you watch/listen again, you wonder quite how you didn't notice how bad the sound was at the venue?
I don't blame breweries for wanting to get their products out there; selling bottles is a brilliant way of raising the profile of a brewery. I think that coming up with and producing a recipe for a beer that works on draught is the best way to go about it; the beer should be as good as a brewer can make it in the medium it is created for - it's just unfortunate that sometimes it doesn't do itself justice served in a different way. Simon has mentioned a similar thing over at CAMRGB, where, when trying one of these same beers, he concluded his interest was piqued a lot more by stronger bottles beers when drinking at home. 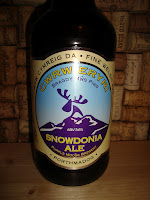 The three Purple Moose beers I had to try were a present from when my parents visited North-West Wales a while back so I don't know any prices.
Snowdonia Ale: There's a smack of pale malt on the nose, it's a lovely, fresh aroma, with lots of meadow hay and meadowy notes.The palate is light and floral, and it's very drinkable, with a touch of sweetness and umami notes on the finish. 3.6% abv. 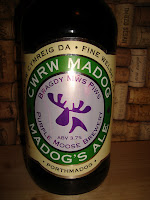 Madog's Ale: Pours a lovely red-amber colour. This has a bit more of a spicy, metallic aroma, and is more pithy than the Snowdonia. The sweetness of the Snowdonia is gone, with the hops coming through a bit more, there are hints of orange, and again, marmite in the finish. 3.7% abv. 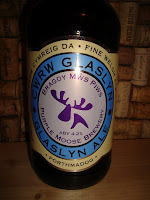 Glaslyn Ale: Once again the nose is dominated by the malt, the hops on the palate are a bit soapier, and it's more fruity than the other two; showing red apples and honey with a more rounded character. 4.2% abv.
So three beers which, while I think would be perfectly good session beers on draught, at home are decent enough, but don't really exhibit a great deal of character. What I do like is that they share certain elements - it suggests there is a 'Purple Moose' flavour profile - which means they are far from being another homogenised beer.
Posted by Gareth at 13:07