Since I left the pub trade a huge number of breweries have started up, completely changing the face of the UK pub and beer scene. Many of these escaped my notice since I was immersed in sitting wine exams and trying to get my head round grape clones and rootstock types. Since I started beer blogging and re-discovering British beer in particular, Magic Rock have been one brewery that has been constantly recommended and raved about, but I've just never got round to trying. The day after IPA day was therefore IPA day squared, a chance to relive #downDIPA perhaps? 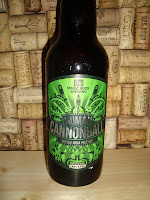 Given I'm not a massive fan of Imperial IPA as a style, I was impressed by this one. It was getting close to its best before date, which might have affected the freshness, but if so I suspect it mellowed rather than deteriorated. It poured a deep reddish-amber colour, and there's bags and bags of hops on the nose, delivering rich citrus and tropical fruit. On the palate the hops are, relatively for a double IPA, held back; which I think gives the beer a better balance, allowing some of the caramel sweetness of the malt to come through. On the basis of this my appetite for Magic Rock beer is well and truly whetted, I'll continue to be on the look out for more of their beers.

You can have a bit of a read of the story behind Human Cannonball here.