When I popped the top on this one I wasn't sure whether it was worth taking a few notes or not. It's not like I was going to be able to tell anyone anything different about it. Once I'd got going though I thought another voice in its favour was no bad thing. So much is written criticising huge industrial brewers that it's quite therapeutic to have a beer like this that's not only faultlessly made, as big brewery products generally are, but interesting to boot. 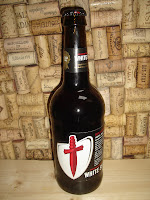 Football on, seventies M&B dimple mug full of Burton IPA - not a bad place to find myself of an early evening. It pours brown, with reddish hints, and retains its head well. I'm still not sure how much yeast has to be put in to get the bottle fermentation going in order for it to qualify for being 'bottle-conditioned' and get the little sticker, but when poured quite vigorously it was clear, and I couldn't see any yeast hanging about in the bottle. What initially got me was how much malt aroma there was; lots of shortbread biscuit backing up the grapefruit of the hops - there's no way you'd mistake this for an 'American' IPA. On the palate there's layer after layer of complexity; dried and citrus fruit, toffee, spices and orange peel. There's a faint reductive 'spent-match' quality to it too, which, like petrol aromas in Riesling, I can imagine is not everyone's cup of tea, but I thought it added a little to the beer. Similarly the finish has some of the soapiness that I know puts some people off cask beer, but in this case it actually works - it not being too dominant. This beer's all about the balance of flavours, not too much, not too little.

Much as I may disagree with many things they do, and stand for, I know the people at Molson Coors aren't daft, so here's hoping they carry on letting the brewers keep this one as it is. I'd be happy to re-visit it every now and again, and I hope others are too; you'd miss it if it were gone.