Well my first beer of the weekend, during my third game of rugby of the day, ended up being one to toast the only home nations victors of the week. On the weekend of the Great Welsh Beer and Cider Festival, I would have loved it to have been the Purple Moose beer I've had sitting around for a while in anticipation of an historic Wales win. It wasn't to be, and once again it was Scottish beer, and Scotland were the only winners of the week. Fair play to them. Although I'm sure it'll be dismissed because of the conditions, both teams had to play in them, and Scotland coped better. Roll on the Melbourne test, and in the mean time apparently there's some football on. 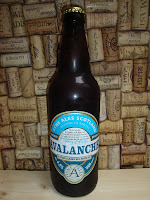 Back to the beer, since this isn't a sport blog. It pours a lovely pale straw-yellow with a slight haze. Initial aromas are all hops; fresh lemon and gentle pine. This continues through on to the palate, backed up with a some rich-tea biscuit flavour which helps give it a bit of body. Overall this beer's all about that freshness though; the finish has even more citrus, grapefruit, bitterness, and it rounds off a perfect summer session beer. Fine Ale indeed.


A bit of a diversion from the beer 'in hand' as it were. Wednesday's Thornbridge trip was pretty inspirational. Mark commented on the post that he'd like to go on more brewery trips, and I think I'd share that sentiment. Even if you are not necessarily that excited about or inspired by the beer itself, talking to people involved in making something that they have pride in and a passion for is motivating in itself.

The fact of the matter is that there is a lot of beer out there that, on its own, isn't really going to motivate you to get the keyboard out and write - as Nick points out over on his blog there is an awful lot of uninspiring beer about. I tend to default to hand-pulled beer if I do get out (which isn't that often) if only because it's something I can't get at home, but sometimes I find myself wondering why I bothered. This can of course all change if you bump into the right person, or you are out and about and find a new pub that just lifts your spirits; an escape from the mundane, or maybe just a timely roof to protect you from the equally wearisome British summer. In the right moment, a beer you might otherwise overlook can provide something that the most flavour-packed 8% hop-monster you've been looking forward to for ages might not.