When is tequila not tequila? Well, when it's made outside of the regions of mexico in which tequila is permitted to be made. Tequila is a geographically specific version of mezcal, and is made along stricter rules than its often rougher country cousin. 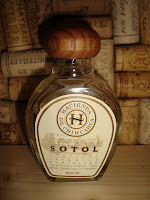 Hacienda De Chihuahua is different again. It is a sotol, being from Chihuahua in the north of Mexico where local laws dictate that the spirit is distilled from dasilyrion wheeleri or desert spoon plants. These are related, but are not the same species as the blue agave used in tequila production. Both are succulents, as are cacti, but neither tequila nor sotol are made from cacti. Hacienda De Chihuahua Sotol Reposado is apparently fermented using Champagne yeast, and the 'Reposado' of the the title means it has been 'rested' for six months in new Limousin oak to mellow out the flavours. A salt and lemon afterthought to chase up a night of lager it isn't. This is a serious spirit.

So how does it taste? Well it pours a clear, bright, pale gold. The oak is noticeable on the nose and it's earthy, but with citrus fruit coming through too with a pleasant oily lemon aroma. On the palate there are pungent limey flavours, it's clean, and with lots of earthy and leafy vegetal complexity and good length. Overall I thought it was excellent, although never having had sotol before it's difficult to compare it to anything else! Certainly there's lots of complexity for quite a light spirit, and all those different characteristics meld really well together.