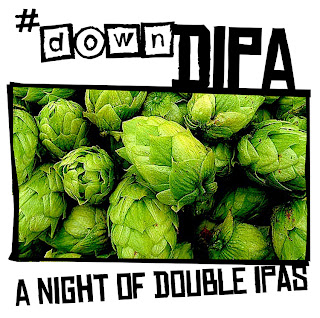 This time around, the revolution will not be televised.

It might, however, be Tweeted. I think. Probably with the hashtag #downDIPA (I might not have thought the political implications of this through.)

With a special 'Down Deeper' double IPA from Arbor Ales (along with a menu of other hop-monsters) it's set to be a pungent weekend! Check out the event page on the CAMRGB website. The Arbor brew is available for order from Beer Ritz.

I do need some convincing. I've not been particularly impressed with double IPAs before, finding them a bit cloying and somewhat one-dimensional, but I thought since I'd not actually tried an awful lot of them I'd have a go. On this blog I've reviewed Victory 'Hop Wallop' and Mikkeller 'I Beat yoU' in addition to having BrewDog Hardcore at their Nottingham opening. I've got Nøgne Ø Imperial IPA here already, and, along with the Arbor Down Deeper I've got Magic Rock Human Cannonball to come off the list. So here's me being prepared to be converted over the weekend!

Join in: CAMRGB on Twitter. and don't forget #downDIPA. Hops away! (Yes, I am expecting a lot of hop puns...)