Last night was The Campaign for Really Good Beer's Twitter event, #downDIPA, and it was brilliant to see the CAMRGB logo on a bottle of beer. For some more thoughts on CAMRGB have a read of Matt's account of the DIPA night here.

It's a real shame that the guys at Arbor couldn't get behind the 'event beer' if you like. I'm only saying that because one of the great things about the Impoff evening was the irrepressibly enthusiastic Elly Bell from Durham brewery really pushing it and getting people excited. Unfortunately, due to the condition issues with the Down Deeper I think Arbor probably felt that they couldn't do a similar thing. Like I say, it's a shame it turned out that way, but I can't fault them for having a go and brewing the Down Deeper specially for the event. Cheers guys! 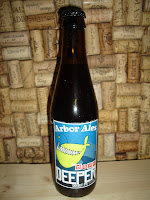 I did try the Arbor; while it has been suggested that it might improve with a bit of cellaring I thought I'd give it a whirl. It would have seemed odd to participate in the event the beer was created in honour of and leave it sitting in the cellar! As advised I poured it warmer than fridge temperature. It looked a bit like scrumpy cider in the glass. There was a bit of stewed fruit aroma; apple crumble mixed in with the skunk-weed hoppiness. I actually got it to open up a lot more by chucking in a bit of taste-free 2.8% lager that we'd bought for a party we had last week (it's basically fizzy water). Once I'd done that the pine and grapefruit aromas really came to the fore along with buttered crumpet flavours. 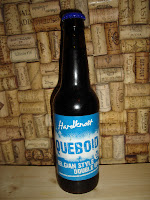 Next up was Hardknott Queboid, billed as a Belgian style double IPA. It pours darker than most IPAs, brown with a reddish hint. There's a hint of smoke on the nose, complementing the big hop aromas. It's a mighty mighty beer lurking in the guise of a Belgian brown ale. The power of the malt balances up the hops beautifully, it's deep and rich, with restrained sweetness and a hint of Belgian ale's dustiness. As it warmed in the glass I got spices, with some cinnamon and fruit cake. It really is a magnificent beer. It's been a while since I had a beer that I really fell in love with, but this is up there with the best beers I've ever had from a bottle. 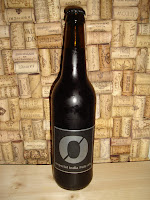 The final beer of my evening was Nøgne Ø's Imperial IPA. Again it's darker than you might expect, looking rather more like a traditional English IPA. It's a full bodied, almost chewy beer. There's lots of treacly sweetness which isn't really lifted up enough by the hops for me, the hops sort of wallow around in the alcohol. I can't help thinking it was a bit overdone, they might have been better aiming for the 8% abv that the Queboid weighs in at rather than 10% - it didn't wear its alcohol particularly well. Add to this a not altogether pleasant, almost blue-cheese like, finish and I've got to say I wasn't too impressed overall. While I can be a harsh critic at times, when my wife tried it she seemed to think I was trying to poison her, but it wasn't that bad.

Am I an Imperial IPA convert? Well, perhaps not, but the Queboid was so good that it sets a benchmark, and I now know how good double IPAs can get, I'm definitely keen to try more. A couple of highlights from what I can remember from the Twitter time-line were Weyerbacher Double Simcoe IPA (c/o Roberto) and, from various people, the Red Willow Ageless. Two more for my 'must try' list!