I've had a couple of superb summery beer and food meals over the last few days. Sierra Nevada Pale Ale was a great match for the asparagus risotto I had the other night, the hops fulfilling the same role as the acidity in a good cool-climate white wine might; cleansing and invigorating the palate without having so much fruit that it overpowers.
Slightly more appropriate to a few days up in sunny East Yorkshire was Sam Smith's IPA with some cheese that we picked up from Roberts & Speight in Beverley. True to form we went in to buy some tickets for their Spring Wine Tasting (you can have a read about some of the wines here) and came out with cheese, bread, beer, wine and a couple of tickets. Armed with some fresh crusty bread, a small jar of Cheese Maker's Pickle from Cottage Delight, a chunk of very very mature Mull cheddar (see the picture)* and I was ready to go. 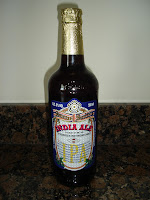 The beer pours a deep golden colour and has a fairly restrained orange-pithy hop aroma with a back up of hazelnuts. The gentle toffee malt came forward more on the palate, and there was a lovely sort of old-school bitterness to it - none of your new-world tropical fruit flavours here thank you very much! There's plenty of body, which also shows it can be done without  jaw-dropping levels of alcohol - or any other part of the anatomy for that matter. I realise that this isn't the most revolutionary or exciting beer in the world but I thought it was a good traditional IPA, and it went superbly well with the sweet fruit of the chutney and the tang of the cheddar. An apple for my pudding and I was well set-up for a tough afternoon of relaxing in the sun.
5% abv. £2.29 (55cl) from Roberts & Speight, Beverley - local wine merchants with a decent range of local and imported beers and glassware; well worth a visit if you're in the area. It's always good to see a beer that's seaweed fined and so entirely vegan.
* I know nothing about cheese, maybe Steve will be able to enlighten me as to what's gone on with the cheddar. I can only tell you how good it tastes!
Posted by Gareth at 11:43