A comparative tasting. Two IPAs with something of a challenge on the label. The first was Sainsbury's 'Taste the difference' (as brewed by Marston's) and the other was St Austell 'Proper Job.' 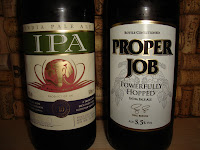 I thought I'd give the Taste the Difference a go as a sort of decider, having had both good and bad from the range in the form of their TTD Albariño (excellent) and Barolo (terrible). Anyway, since I had to go into a Sainsbury's Local to get bread I felt I deserved a reward for braving such a place.

I enlisted the help of my other half to ensure impartiality, the idea being to see if the beers lived up to their billing. And so armed with snifter glasses, we dived in. Both poured with an amber hue, the St Austell retaining its head a little longer than the TTD. 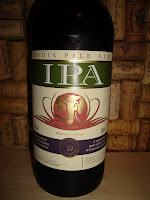 The Marston's, some choice quotes from the missus:
Initially: 'Bitter, not too keen.' 'Bland, generic. No character.'
In summary: 'It's like John Smith's, tastes cheap.'

There was very little on the nose, faint citrus (lemon) on the palate but bland summed it up nicely, the bitterness of the hops had no fruitiness to back it up, and so was hardly pleasant. This sort of thing annoys me. If you're trying to encourage people to drink better beer then this will do more harm than good, why pay the best part of two quid for this when a can of generic premium lager will cost you half that? 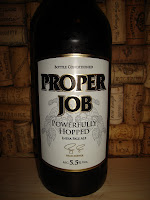 The St Austell:
'I much prefer number two.'
'Punchy'

Pithy grapefruit on the nose and on the palate plenty of hop-power, and a real zingy, uplifting tang rather than being creamy. Pine on the finish. This was really good, just as you'd expect an IPA to be - you get flavour for your money. Powerfully Hopped? Yes. Proper Job? Indeed. And could you taste the difference between it and its pale imitator? Most definitely.