Once again the craft/keg/real/cask thing reared its head with Jeff Rosenmeier from Lovibonds sparking a debate by declaring he made 'craft beer' as opposed to real ale or the like. All of this is thrashed out on both sides over at Des de Moor's blog. The root of the issue seems to me to be beers that are good but aren't easily labelled (not literally) or placed into a category. What must the Campaign for Real Stout* be thinking about this?

Personally I think it's a problem that stems from labelling/categorising outliving its usefulness. If you are looking for a record in a shop (remember record shops?) it's useful to be able to look in a specific section; Indy (almost by its very nature), Drum & Bass, Metal etc. but when it gets down to rather pointless debates about whether something is tech-step or neurofunk, groove or thrash, grindcore or death-metal,  it all outlives its usefulness. If you don't know what I'm talking about then pick your genre on Youtube and read some comments, or better yet, don't - it gets very annoying. 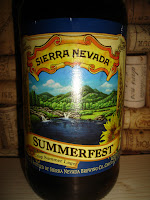 All of which brings me back to a beer, the Sierra Nevada Summerfest. I've no idea if they are still 'small' enough to be officially defined as a craft brewery (I suspect they are, even if only to remain 'craft') but if their beer's good, then their beer's good and I'm happy to drink it.

Pours with a slight haze. Gentle hop aroma without pithiness; citrus. Light-bodied with grapefruit on the palate. Fine carbonation - here my beer vocabulary lets me down a bit - if it were a sparkling wine I'd describe it as a delicate mousse, which it isn't but hopefully you get the idea; small, delicate bubbles rather than big fizz. This, for me, sums up how a lager should be. Yes, it's easy-drinking, and not the most challenging beer in the world but it does have flavour, and no matter what category you might want to put it in, in the end I'd just go for it being good beer.

A final thought: Is this a responsible beer to make? If all lager was this good we'd have nothing to moan about, and given it is one of the two great national pastimes we'd only be left with queueing. Damn these Americans, bringing their good beer over here... Back to Jeff I think.