Here was something that was a bit different to the norm; mulled cherry beer, a beer we had to pop into the microwave to heat up before drinking. It didn't look a lot different to other cherry beers, albeit quite dark, and the head did three rather different things in the three different cups we warmed up (one retained, one went flat, the other frothed up - go figure!) Serving recommendation was 70°C. 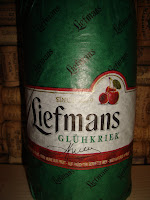 Lots of warm spice dominate the cherry flavours. Clove, cinnamon, a touch of nutmeg. Overall it's quite medicinal - kind of like the original cherry menthol Tunes - it probably helps you breathe more easily or something. There was also a herbal note to the finish.

I'm not particularly a fan of mulled wine, and really I didn't feel this offered enough variation on that mulled 'theme' to stand out on its own as a product. In a blind tasting I'm not sure, with the spices being so dominant, that you'd necessarily taste an awful lot of difference. I thought it probably needed something a bit more pithy in there to add interest.

I'd be interested to hear if someone is a mulled wine fan and has tried it, but of the three of us that tried it the other night none of us were very impressed (in fact my wife thought it was undrinkable.) Apologies if that's a bit negative - I'd usually shy away from doing a negative review like this - but it's the first time I've tried this as a style so it had to make the cut so to speak!