I'm in the process of putting together a series of posts about whiskies and wine casks. It's a nice little bit of revision for me, particularly since my fortified wine diploma exam seems like a lifetime ago now! Rather than straight tasting notes on whiskies I'm going to talk a little bit about whisky casks' previous inhabitants, the wines whose character will bring about a change in the whisky's personality, and see if I can detect how the wine has affected the whisky in some examples.

Ex-sherry casks are the most widely used casks in the whisky industry behind those that have previously held bourbon. The Macallan in particular forged a global reputation off the back of some incredible sherry-matured whiskies, but other distilleries such as Aberlour and Dalmore owe a lot to a somewhat unfashionable wine from the south of Spain.

Wine character is generally a product of the viticulture of the region it comes from, it's why wine is said to exhibit a sense of time and place, far more than a less terroir-influenced product like whisky or beer. The climate can drive the vinification process - Champagne as we think of it would probably not exist if everyone had been happy drinking the region's acidic, austere table wine. Marco de Jerez is at the other end of the climate scale from Champagne; it's hot, and the grapes ripen with low acidity and high sugar levels. The most commonly grown grapes are of the white Palomino variety, but don't expect to find this as a varietal wine on the supermarket shelves next to the Chardonnay - these grapes have a very different fate.

The Wine: Oloroso Sherry. The first thing to get your head round with Oloroso sherry is that it is a white wine. In terms of whisky this is a bit odd, one of its most desirable characteristics being the generous colour that ex-Oloroso casks impart (think Aberlour A'bunadh). The reason this 'white wine' is no longer white is simple; it's oxidised. In the same way as the flesh of an apple that's been cut open and exposed to the air will turn brown, the juice of the grapes has turned brown. It is this oxidative ageing process that makes Oloroso sherry so individual a wine.

Vinos Generosos, the dry wines of Jerez, are made from Palomino grapes. The must is fermented, racked and the sobretablas are analysed and earmarked to become one type of sherry or another. They are then fortified to different levels depending on the type of sherry required. The wines selected to become Oloroso sherry are fortified to 17-18% abv in order to kill off the flor, a layer of yeast that forms when the wine settles that would otherwise protect it from oxidising. The 'preferred and most common' wooden cask for the crianza (ageing) process is a 600 litre American Oak 'butt' - oak has been imported on the return journey ever since Spain started exporting wine to the Americas centuries ago. About 3-5% of the wine per year is lost through evaporation - the angels, it seems, like a sherry as an apéritif before their whisky. Sherry's ageing process involves a solera system, which again provides a whisky link, since Glenfiddich use a similar arrangement to age their 15 year old from their core range. It's a slow process, the sobretablas are placed in a row of barrels, where space has been made by removing mature wine out of the row at the bottom, and moving no more than one third per year down at once. Over the years the wine becomes oxidised, and turns into something very different to the white wine it started as.

I was up in York the other week and I had a glass of Alfonso Oloroso from Gonzalez Byass before my dinner at Ambiente. It's not something I've had very often outside of doing wine exams, but I really enjoyed how different it was, a tremendously complex wine for the price, well worth trying! 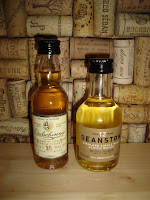 The Whiskies: Dalwhinnie 15 & Dalwhinnie 'Distiller's Edition'. Dalwhinnie is one of Diageo's 'Classic Malt' range, all of which have a 'Distiller's Edition' counterpart which are aged in a range of different casks. Dalwhinnie's extra maturation occurs in Oloroso sherry barrels, for an extra year, but the questions I'm trying to answer are 'What difference does it make?' and 'What characteristics of the whisky can be attributed to the sherry?'

The whiskies are noticeably different in colour, the Oloroso finished expression being that much darker than the original. On the nose the 'regular' Dalwhinnie is all creamy vanilla and honey. By way of contrast the Distiller's Edition seemed more complex, with the honey intertwining with golden syrup, and the vanilla giving way to almond notes. Moving on to the palate and the 15 is full of sweet malt, it's phenomenally smooth, like a rich malty drinking chocolate. There's a whiff of smoke on the finish but nothing to rock the boat, everything works in harmony! The Distiller's is an entirely different animal, it still has some of that sweetness but with a harsher mouth-feel. You definitely get the green-apple and balsamic tang from the sherry through the mid-palate. The finish has more sooty smoke, like burnt toffee. Tasting these two in parallel does somewhat highlight a difficulty. Dalwhinnie really is a very good whisky at 15 years so it begs the question as to whether it needs an extra year in a sherry barrel? Obviously that's a moot point, and not really the point of this article, but I personally would stick with the regular 15 year old.

Deanston 12 (distillery bottling) & Deanston 12 from The Whisky Shop's Glenkier Treasures range. Another highland pairing; both the same age but one is entirely bourbon cask and the other sherry finished. There is still plenty of scope for the distillery character to come through even with different maturation methods. On the nose I got hay, cream and porridge, with more wood on the sherry matured version. On the palate I got honey again, spice; ginger, liquorice, herbs and peel on the palate. The sherry cask matured was more spicy (clove), with more of a burnt note and a sweeter almond finish, the extra sherry-oakiness complementing the creaminess nicely in the finish too, while the distillery bottling keeps a depth of character at the same time as maintaining a lighter touch, and a faint whiff of smoke.

Some great whiskies, and a shockingly under-rated wine category, although I do get the impression that Sherry is coming back from the brink. Since the regulations now mean that all sorts of 'sherry' that was really nothing of the sort can't get away with spoiling the wines' reputation, hopefully it will carry on making a come back. Next up, more sherry in the form of a personal favourite; Pedro Ximénez.

Oloroso sherry image taken from, and reproduced with the permission of, the Consejo Regulador Jerez website all about sherry. Well worth an explore.

1. Various Authors. The Big Book of Sherry. Regional Ministry of Agriculture and Fisheries, Department of Publications and Dissemination.↩
Posted by Gareth at 08:30