What’s the Big Deal With IPAs? 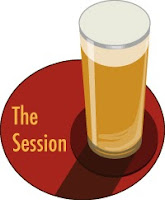 I've not done a session post for ages but this one hosted by Justin over at Justin's Brew Review appealed! Justin's wondering what the big deal is with IPA?

For me modern hop-forward American-style IPAs bridge a gap. They are a beer you can drink on a hot summer's day that quench like a standard big-brewery lager but actually taste of something (however unsubtle) even when served cold - by which I mean colder than you'd serve a cask beer. They are also a convenient way of getting round 'that' question. The conversation which could go something like:

A: What's 'craft beer' when it's at home then?
B: Well it's kind of micro-brewed beer that's not necessarily governed by things like it having to be served in a certain... Oh, you know what...  Just have a Jaipur.

But most of all. I just really like them. I don't care if they're 'real' or not. I don't care if they're trendy. In fact I think that's great - it means they're more widely available which means I get the chance to drink them more. I don't care if people who probably get far more opportunities than me to drink them are bored of them, or if the hipsters have moved on to the next big thing. I just really like them. I also like more traditional British IPAs, and pretty much every other sub-style I've tried so far, so long may IPA rule!
Posted by Gareth at 17:42