This is a post I wrote for the Whisky Shop's W-Club blog, but I thought others might be interested in having a read. We had a tasting hosted by Peter Wills from the Kilchoman distillery, Islay's newest distillery. 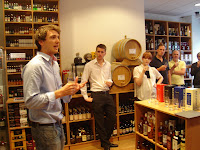 Kilchoman was set up by Peter’s father Anthony, who had previously worked as an independent bottler. Due to issues trying to get hold of good stock as a bottler Anthony decided that the best route to ensure a supply of good whisky was to make it himself. Peter got involved from the age of fifteen, learning the ropes early when he wasn’t contributing to distillery ‘teething troubles’ by watching the Six Nations instead of making sure the old wood-fired kiln wasn’t burning down six months into the project! Islay was a natural choice because of family roots, and it meant they were already connected with a huge established tradition of whisky from the island. Back when the last Islay distillery prior to Kilchoman was built there would have been over a hundred distilleries on the island, albeit mostly on a tiny scale. All the raw materials were there to make whisky, but it’s peat that defines the industry on the island. After all, since the island is mainly peat bog, there was nothing else there to burn! 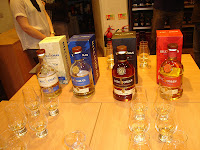 Kilchoman goes back to these grass roots of Islay distillation. It’s built in a farm building, and for the first of the whiskies we tried all the barley is taken from the farm too, and the whole lot is matured in warehouses on the island. I think it’s fair to say that Kilchoman’s 100% Islay is the expression that represents the company the best, as pure an expression of Islay as is practically possible. All the farm-grown barley is malted on-site at their own floor malting, and peated to around 25 ppm. It’s all bourbon cask matured giving a whisky that is full of fresh, ripe honeydew melon, light citrus and sweet tropical fruit which all complement the peat beautifully.

The peating levels put the 100% Islay right in the middle of Islay’s whiskies. The other three we tried, because they are distilled from malted barley bought in from the Port Ellen maltings at around 54 ppm, are as peaty as Ardbeg, at least in terms of the raw materials. So moving on to the Machir Bay meant the peat was cranked up a few notches. Like the 100% Islay this was the second edition. It’s a vatting of four and five year old whiskies finished for four weeks in sherry hogsheads. Once again it’s quite a light whisky, but less creamy and malty than the 100% Islay. The sherry finish does give it a bit more weight to support the extra peat, and there’s less of the melon fruit than the 100% Islay.

From the outset, working with whisky consultant Dr James Swan and later with experienced ex. Bunnahabhain manager John MacLellan, a light, fruity dram was what James Wills had in mind. So it was through working with these experts that the Kilchoman recipe came about. It meant that the shape of the built-from-scratch still (tall, with a reflux bulb), cut length (5-55 min) and level (68-72%), along with mainly ex-bourbon maturation were all tweaked and geared towards the lightness that I’ve mentioned before. What wasn’t quite so planned was the expensively made to measure bottles weighing in a little too heavy and pushing any postage up a Post Office weight bracket! The original £1.5 million investment had to be turned into three times that, through a combination of cask and futures sales, generous friends and family, and venture capital from less-likely sources such as Domino’s Pizza.

The last of what is planned to be the core whiskies, the Loch Gorm, is a departure from the bourbon cask norm, in that it is matured in a mixture of hogsheads and butts that have previously contained oloroso sherry. The result is an expression with a lot more nuttiness and dried fruit spice. Kilchoman’s independence means it is free to experiment, hence when the first Loch Gorm was hugely successful they could easily introduce it into the core range. While there are no plans to go to the cask experimentation levels of someone like BenRiach I don’t think they’d ever say never, and there are apparently casks quietly maturing that have previously held Port and Sauternes as well as the ones they’re using for the core range.

This leads us on to the last whisky, a single cask offering selected for The Whisky Shop by Darren Leitch. It’s bottled at cask strength and the cask provided just 260 bottles. I found it quite closed on the nose, its 61% abv meant that the alcohol kept things somewhat under wraps until you got on to the palate, but once you do it explodes with all those lovely fresh tropical fruit wrapped up in sweet peat smoke, which goes right through to a superbly clean, briny finish. 61% alcohol and moreish? While it’s potentially a dangerous combination, it is certainly an enjoyable one. With the addition of a little water the nose opens up and it shows some of the citrus and pear that you get with the first two expressions. 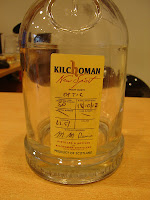 Finally we had a bit of a try of the new make spirit; Kichoman before it becomes whisky. At cask-strength rather than how it comes off the still, it has yet to integrate the fruit, although it is still quite noticeable underneath the herbaceous core that mellows as it becomes whisky.

It was fantastic to hear the stories Peter had to tell about the various trials and tribulations of opening Islay’s newest distillery. They certainly had their fair share of growing pains, but now they’re in a position to be commercially sustainable, they look like being here to stay, although you might not want to visit when England are playing Scotland in the rugby.